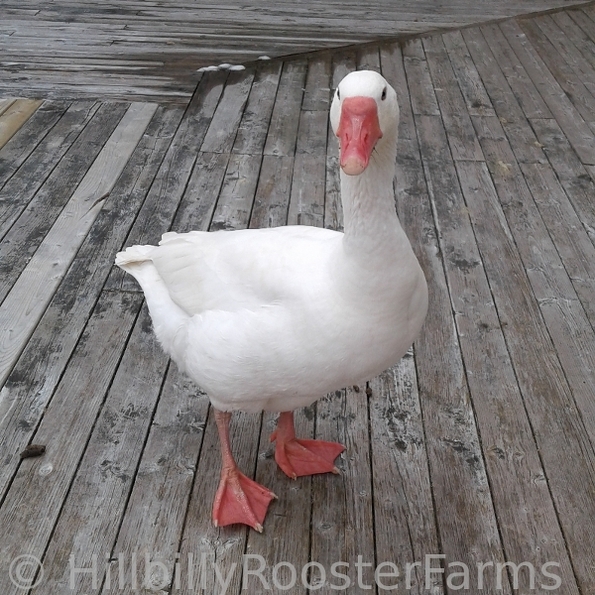 Our little hobby farm is set on just under 2 acres, backing on to green space. Wildlife and farm animals however is not something we want intermingling. So what's a girl supposed to do? Little did I know when I first got geese that they would become the best guard animals around. We've had large German Shepherds that didn't scare people away as much as these geese. In fact, some people won't even get out of their cars when they are honking and flapping their wings running towards them in the lane.


These two are little imps -- bratty toddlers to be exact. They love torturing my husband. They'll run up to him, doing their best to sneak up on him. How they figure they're being stealthy, all the while flapping and honking, is beyond me. And yet, when he turns around to look at them, they turn away almost like "hey, I wasn't doing anything man". Mica (pictured left) is the worst offender.


But the best part of having geese? They are super protective of their flock. Mica and Frou (his girlfriend) have accepted the duckies as their own. Wherever the geese go, the duckies are soon to follow! It's adorable, and hilarious all at the same time.


The most hilarious thing to watch is pool time. They LOVE their water. Fresh water is an aphrodisiac to them. Mica, as naughty as he is to my husband, will cuddle him and brush against him when he refills the pools. I was amazed at watching this goose, literally trembling and cooing up against him. Adorable, I tell you.